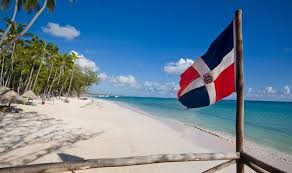 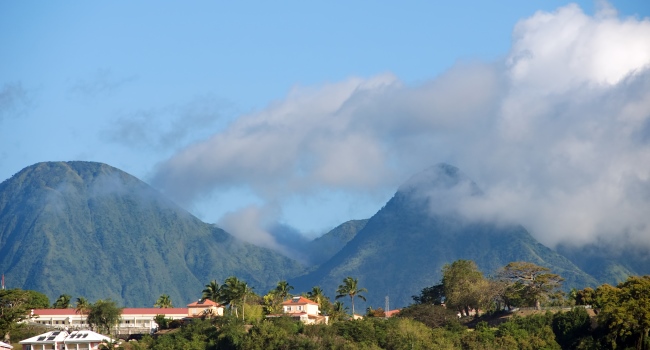 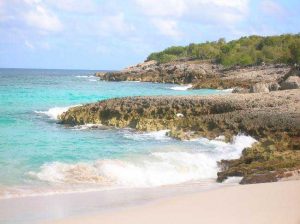 Geographically, the term “Caribbean” includes the Caribbean Sea, and all islands located southeast of the Gulf of Mexico, east of Central America and Mexico, and north of South America.

Although the Bahamas and the Turks and Caicos Islands are not part of the Caribbean, they have nevertheless been included in this section because of their cultural, geographic, and political ties with the Caribbean.

Caribbean Islands
In total, there are over 7,000 islands in the Caribbean (including rocky islets, small coral and sand islands, and coral reefs).

The largest Caribbean islands are Cuba, Jamaica, Haiti (which is geopolitically divided between the two countries – Haiti and the Dominican Republic), and Puerto Rico.

The Caribbean islands form a large arch extending east of the Yucatan Peninsula (Mexico), and south of the Florida Peninsula (USA), and ending along the northeast coast of South America.

The Lesser Antilles, as well as the Greater Antilles, Bahamas, Cayman Islands, and Turks and Caicos Islands, together form the West Indies.

The Lesser Antilles begin east of Puerto Rico. This long chain of small islands, bordering the Atlantic Ocean in the east, bends southward and ends on the island of Trinidad, north of the coast of Venezuela.

Volcanoes of the caribbean
Most Caribbean islands are of volcanic origin, and many islands include a volcanic peak, or are mountainous.

Evidence that volcanic activity in the region has been going on since very old times can be served by black (volcanic) sandy beaches on some islands, for example, Dominica and Puerto Rico.

Seismic activity is regularly observed in the Caribbean, as some volcanoes are still active, in particular on the islands of Saint Lucia, Dominica, Grenada, and Saint Vincent.

Caribbean Mountains
In the Caribbean, several significant mountain ranges extend, in particular in Cuba, Haiti, Jamaica, Trinidad and Tobago. The highest point in the Caribbean is Duarte Peak (3,098 m.), Located on the island of Haiti, in the Dominican Republic.

Caribbean Forests
Forests grow on many Caribbean islands. The largest forests grow in Dominica and Jamaica. Most islands have small waterfalls, usually located on high ground.

Caribbean Coral Reefs
There are 52,000 sq km in the Caribbean. coral reefs, accounting for approximately 9% of the total number of coral reefs worldwide. Reefs are an important geographical attraction of the region, and some Caribbean islands are known throughout the world precisely because of reefs, such as Cozumel Island.

Caribbean Rivers and Lakes
Small lakes and rivers are scattered across the Caribbean islands, of which the most significant are in Cuba, Haiti, Trinadad and Tobago.

In addition, over 400 relatively small rivers flow along the Caribbean islands, as well as many small streams that often dry out in the summer. The longest Caribbean river is located in Cuba – the Kauto River, with a length of 370 km., Originating in the Sierra Maestra.

Caribbean Ponds
The largest water bodies in the region are the Atlantic Ocean, the Caribbean Sea itself, and, to some extent, the Gulf of Mexico.

The total area of ​​the Caribbean is 2,754,000 sq. Km. The deepest point of the sea is the Cayman Trench (7,686 m below sea level), located between the Cayman Islands and Jamaica.