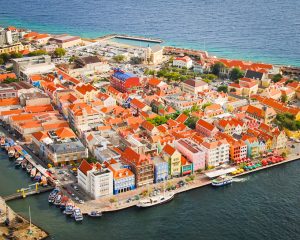 Curacao is a tiny “Holland”, which can be seen on the map only with a multiple increase. This is truly the pearl of the Netherlands Antilles, surrounded on all sides by the azure Caribbean Sea. As soon as you hear the local speech at the airport, papiamento, you understand that the culture of the island was significantly influenced by the Dutch, Spanish, African and Caribbean cultures – and the mix turned out, it must be said, is wonderful!

Curacao is a very well-groomed, poorly developed resort with good service, where it is amazing to hear native Russian. It is worth going here if you want to rest comfortably, there is no beating poverty, very safe. The small streets of Willemstad resemble Europe, except for a different color: bright houses, cheerful graffiti, iguanas, immortalized and reproduced, it seems on everything, anything and everything: paint on fences, cars, glass, house facades; in the form of clay figurines, porcelain plates, stone (and not only) sculptures, from cream on cakes, finally.

It will be interesting for fans to snorkel and scuba diving (besides reefs there are curious sunken objects, which are always full of liveliness), as well as surfing. However, it is worth considering that the island knows its worth, and the prices here are quite European: this place cannot be called cheap.

Visa and border crossing
If you have a multiple Schengen visa valid during the whole vacation time on the island, you do not need to apply for an additional visa. The maximum permitted stay on the island is 30 days. A border crossing stamp is placed right at the airport.

In the event that there is no visa, it must be issued at the Consulate of the Kingdom of the Netherlands or at the VFS Service and Visa Office. A request is made for a short-term Caribbean visa.

Import Rules
Although Curacao is under the protectorate of the Netherlands, it is strictly forbidden to import drugs and drug-containing drugs onto the island. Haiti leather items are also prohibited.

If you take expensive jewelry and watches to the island, you should be ready to present, upon request, evidence of your initial ownership: a check, a mortgage, a written assessment of the jeweler, and an insurance policy.

Non-residents over 18 can bring here 1 liter of liquor, 200 cigarettes, 25 cigars and 125 g of tobacco. If you are carrying an amount of money in excess of 10,000 USD, this will also need to be reported in the declaration.

I wanted to spend all my vacation on Curacao, so I did not consider cruise options, but I know that traveling in the Caribbean rarely goes without visiting this picturesque island, so a sea liner can be an alternative to an air liner.

Touristic Regions
As such, there are no regions on the tiny island, we can conditionally divide Curacao into the northern, southern, western and eastern parts, since the relief and flora are very different in different directions:

on the east bank it is very sparsely populated and deserted;
on the south coast is the capital of Willemstad, small harbors and ports;
the northern coast is distinguished by volcanic rock, it is brutal and monumental;
Christoffel Park is spread in the West, and all the most beautiful beaches are concentrated in this part of the island.

Willemstad, the capital of the state and the largest city of the island concurrently, is divided into districts by the channel Santa Anna Bay (St. Anna Baaai): Punda (eastern part) and Otrobanda (western).

The symbol of Punda is a bright yellow old mansion with the inscription Penha, you immediately pay attention to it when you cross the Queen Emma Bridge. Punda is lively, commercial, beautiful, but they do not live there, it is rather tourist. The ugly band is just designed for living, there are many bars and everything is a bit simpler. The old Jewish quarter of Charloux is located north of Punda. Unlike Punda, it is quiet, filled with calm and sustained pacification: most of the buildings are old manors that you just want to look at and photograph.

Top cities
Willemstad
Curacao is rich in picturesque villages, whose sights are beaches and natural beauty, but, of course, the capital – Willemstad – is the main city of the island.

Getting for the first time on its embankment, looking at houses of the XVIII-XIX centuries with carved roofs, standing strictly in a row and absolutely identical in height, you feel a slight feeling that you are walking along Amsterdam. The old estates and villas are in perfect condition – no chips, no cracks, as if they were repainted every year. Many architectural sites are protected by UNESCO. Interestingly, the city is completely differently perceived day and night, when it is illuminated by colorful lights. Be sure to arrange yourself a night promenade!

In principle, there are no more remarkable and large cities in Curacao. 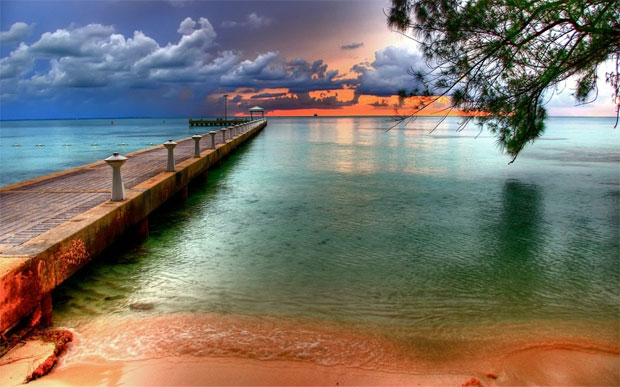 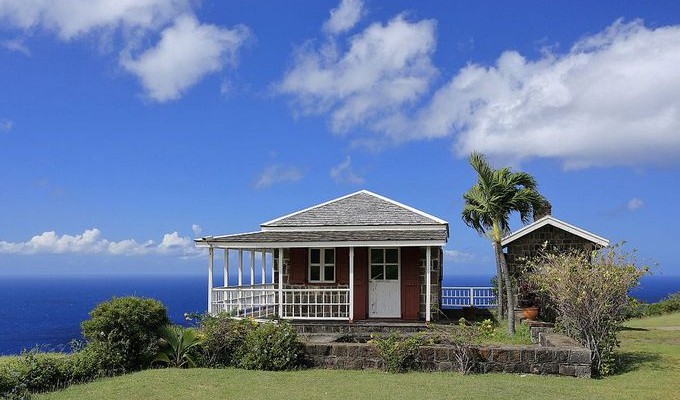